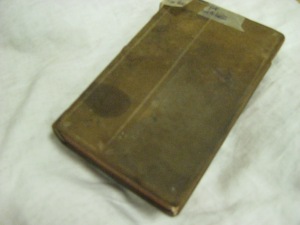 Keith and I spent two days in the Derbyshire Record office. There were twelve packets we had chosen ahead of time, and we were permitted to look at them one at a time. It was a bit like Christmas time – we each had a packet tied neatly with tape and no idea what it contained. The first packet contained “the letters” between Katherine Gell and Richard Baxter – which Keith had discovered via the internet four years earlier. It also contained copies of letters written by Robert Porter, a local Minister at nearby Pentrich. These letters were written between 1655 and 1658 – soon after Katherine’s infant son Thomas died aged seventeen weeks. 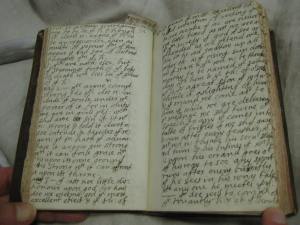 This was also a “peak” time for Puritan practices – and the Gell family were known for their strong commitment to puritan practices and Katherine was keen to be diligent in the duties of Christian living – bible reading, prayer and meditation, as well as raising her children and for looking after the poor and needy who lived in the tiny villages nearby. This sense of duty started to overwhelm her after Thomas died.

I wonder whether Katherine put up with circumstances that gave her cause for much anxiety and fret ever since her marriage and move to Hopton and Thomas’ death tipped her over into a state of depression. This notebook does not contain Katherine’s letters to these two men (although some of her letters are with Richard Baxter’s correspondence in Dr Williams’ Library in London) – but much can be gleaned from what they write to her. She appears almost suicidal and her bible reading, prayers and meditations do nothing to sooth her unsettled soul.

Katherine has carefully copied these letters into this notebook and probably returned the letters to the author – this was a normal practice of the time. She has beautiful writing and has used her own shorthand to make it quicker and easier. There is a tiny piece of paper that looks like a bookmark – suggesting she would sit and read these letters again and again. Were these letters helpful? Did they provide comfort? We can only guess as after 1658 the letters end and not much else is known of Katherine except that she died in 1671.

Keith was excited in a Keith way about the Porter letters and started to write them out by hand. The notebook contained about 150 pages – and it was going to be long and painstaking. He asked the staff if he could photograph them. They were positive, providing we did not use a flash. Excitedly we started, Keith thinking he could put them onto his iPad and work from home in Aus on writing them out in more contemporary language at his leisure. Suddenly, the staff asked us if we had much more to copy. Apparently we were breaching copyright. Here began a tangle legal jargon and the making of ridiculous laws. Apparently, these letters fall under the copyright laws which last until 2039 and you can only copy 5% at one time. The staff had been on a copyright training course and were adamant – the law must be upheld. Just means we will have to return one day – with lots of time. 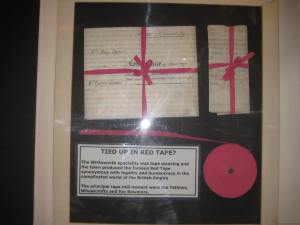 this red tape was first manufactured in Wirksworth – how ironic that we had our encounter with legal red tape here!

The other packets contained equally interesting documents, all small enough for us to copy by hand. The other discovery was a journal article written in 1880 in the Journal of Derbyshire Archaelogical and Natural History Society – who would think to look there for an article containing the minutes of the Wirksworth Classis – meetings of local ministers in which they listened to each other preach sermons and decide whether the local clergy being picked to work at the nearby churches were suitable candidates – based on their ability to preach the word truthfully. I would like to note that I found this article and then kindly copied it for my husband – almost 100 pages – no breaching of copyright this time, and he offered me a job of “research assistant”. I responded “perhaps you could be my research assistant”.

I am a Christian, a wife, a mother, an ex-librarian, a minister's wife, a women's Pastor, a quilter, a reader, I enjoy thinking about things slowly, I love cups of tea, I love sitting at my kitchen table in dappled sunlight and chatting with my friends, my children's friends, my family abut anything and everything.
View all posts by sarahcondie →
This entry was posted in Travelling and tagged Derbyshire Record Office, Katherine Gell. Bookmark the permalink.