A couple of months ago we went to hear Ralph McTell perform at the Balmain town hall. The audience were mostly our age and older as we all relived our youth and listened to him play his wonderful ballads. One of his most famous is Streets of London and I have remembered it while Keith and I have walked the streets of London this last week.

Last time we were in London, I mastered the Tube and travelled everywhere around London underground. I would pop up for air, explore a bit and then burrow down for the next destination. I had figured out how to get to our conference from Elephant and Castle by tube, but our wonderful hosts at our B & B told us to catch the bus.

We had three days of conference and three days to explore. Armed with bus numbers and our Oyster cards we set off for a day of exploration and leg stretching – we were feeling rather cooped up after sitting for hours on the plane. It is amazing what you see when you are on a bus and walking the streets of London.

Our first day in England was warm and sunny and we both got sun-burnt standing outside Buckingham Palace waiting for the changing of the guard. We then walked through all the parks we could see on our map – Hyde Park, Kensington Gardens and then across to Regent’s Park. The flowers were amazing and their smell transported me back to a summer in 1967 which I had spent in England with my mother and sister visiting relatives and family friends.

After the conference, we had two days to explore the streets of London a little more. We became confident bus travellers – you see so much more above ground. I am glad I abandoned the mole’s way of doing London. We did do a lot of walking. My Mum has been to Prague recently and she told me that she had trodden on every single cobblestone and this is how I felt about the streets of London – we must have walked along all of them, but, we didn’t. London is enormous and we only skimmed a few.

We explored the British Museum, again, you could spend weeks here savouring the treasures the British have plundered from foreign shores. We stood in on a talk about how the Romans came to England and their impact on the religion of the country which was fascinating. After our brains and feet reached saturation point, we headed out to the streets and made our way to the Tate Modern that sits beside the river.

It had turned into a glorious afternoon, so we sat beside the Thames in the sun and I had a little snooze, while Keith watched the world go by. After a little time in the Tate when I decided that some modern art really does not do it for me – I fail to appreciate its meaning, we walked some more until we found a wonderful Turkish place in Southwark – a serendipitious find.

On Sunday, after a visit to St Helen’s Bishopsgate – which you will only find if you follow the giant gherkin, it is surrounded by towers and scaffolding and no signposts – you are just meant to know where it is, we did a wonderful historic walk from there to St Paul’s.

I will say more about our visit to St Helen’s in another post, as this is about the streets of London. This walk is in the heart of the financial business centre and on a Sunday it is deserted so we had the place to ourselves.

We discovered numerous hidden churches and secret gardens. Many of the churches have been designed by Christopher Wren after the great fire in 1666, they have long tall spires which today are dominated by new towers. In fact you could miss them completely if you were not looking for them. We also found the site of the first coffee shop in London!

The walk took us along the ruins of a wall built in Roman times to keep the city safe – it lay buried until the bombings during World War II.

After passing the place where John Wesley was converted and started his amazing ministry, we visited the Museum of London which is well worth a visit. I had never heard of it, but it is filled with treasures that have been uncovered from a London of the past – including Roman London to the London of today. We listened to a wonderful talk about London at the time of Charles I, the only English King to have his head chopped off – very publicly, to the Restoration of the Monarchy, the Plague which killed half the population of the city and the great fire in 1666 – imagine living in London during these tumultuous twelve years! So much happened in a very short space of time.

We then found our way to Soho and a wonderful Indian restaurant – inexpensive and delicious and watched the night life of the gathering of Italians to watch a European football final. The police were out in force. The streets of London are mixed and varied – you certainly miss them on the underground. 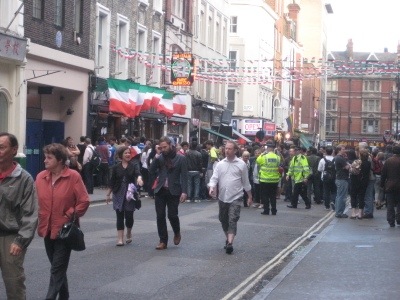 I am a Christian, a wife, a mother, an ex-librarian, a minister's wife, a women's Pastor, a quilter, a reader, I enjoy thinking about things slowly, I love cups of tea, I love sitting at my kitchen table in dappled sunlight and chatting with my friends, my children's friends, my family abut anything and everything.
View all posts by sarahcondie →
This entry was posted in Gardens, Travelling. Bookmark the permalink.

6 Responses to Streets of London