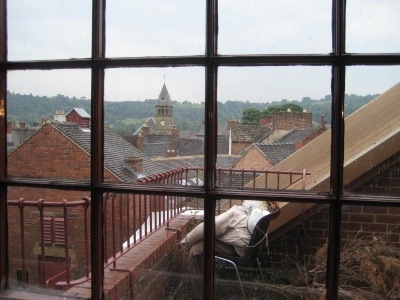 We dashed into the Wirksworth Heritage Centre seconds before the heavens opened. The shrunken elderly woman eyed us and said “dirty weather”. Wirksworth is where the Gell family went to church. We had explored St Mary’s earlier to find Gell graves and found an entire corner devoted to this family – names and dates spanning centuries, but no Katherine or John Gell. However, we found two memorial plaques for two of their children Temperance and Philip. This gave us the names of all the Gell children – missing information.

Wirksworth is nestled into a valley surrounded by lush green hills. This is where many workers lived who worked in the lead mines. This is the town that George Eliot’s novel Adam Bede is based – her aunt and uncle lived here and they are the models for two of her characters. She uses different place names. I had this book sitting beside my bed to read for years and didn’t – I knew it would be sad and hard work at that point in my life, I was not in a place to deal with its contents – I am inspired to put it beside my bed once more. Who owned one of these mines? The Gell family – this is how the family acquired their wealth in the 1500s.

We visited Hopton Hall which is where Katherine and John moved as a young married couple in 1645. Katherine was aged twenty. She was a committed Christian and keen to be a godly wife and she gives birth to her first child Elizabeth at the end of this year. Her Father-in-law described the baby as a “pretty wench”. Two years earlier, this Hall had been plundered by King Charles Ist men as the Gell’s were strong Parliamentary supporters. 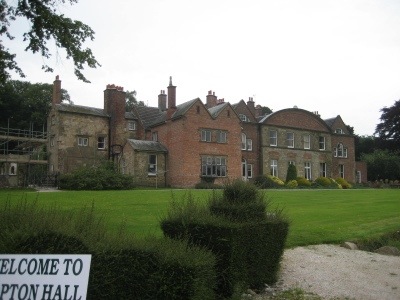 It is a somewhat bleak place to live. The dirty weather gave us a taste of what the weather might be like – often. Behind the hall are steep hills which is where their mine was located. A cycle track leads up this hill now. Katherine was an intelligent sensitive woman who had mostly grown up in London and at her family’s estate in southern England. Imagine leaving that for this new home, and in a time of civil wars and much political unrest? John was a parliamentarian and would leave her on parliamentary business or to carry out errands for his father Sir John.

The Hall is now luxury holiday accommodation – too expensive for us to stay but the gardens are open to the public and have been lovingly restored and developed over the last fifteen years. They are beautiful and there are parts that look like they could have been what existed back in Katherine’s time – or I would like to think so – I would like to picture her discovering clumps of snowdrops in her walks around the gardens. 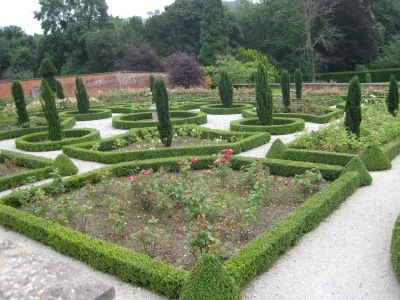 Keith and I had a celebratory cup of tea in the newly constructed rose garden. We found the the restored well which could have been the family’s water source. 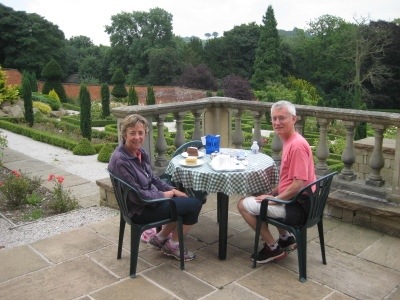 We explored two tiny villages on either side of Hopton Hall and made two further discoveries. In Carsington stands a tiny school house built by Katherine’s daughter Temperance in 1716 for “This school was built and given by Mrs Temperance Gell of Hopton. For twenty poor children of Hopton an dCarson: To learn to read, write and other proper works. 1726.” 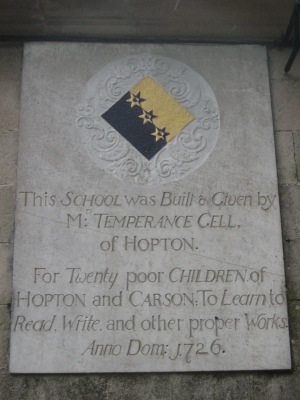 In Hopton, on the other side of the Hall we found a hospital built by their son Philip to house two poor men and two poor women of Hopton and Carson.

Katherine was a dutiful Christian woman known for her acts of kindness in caring for the poor and the sick. Her children carried this legacy into their own lives and continued performing acts of kindness.

Despite the “dirty ” weather, it was a day of discovery. We were also delighted to discover a delightful cafe in Matlock called Peli Deli – very friendly, free wifi and wonderful interesting food. 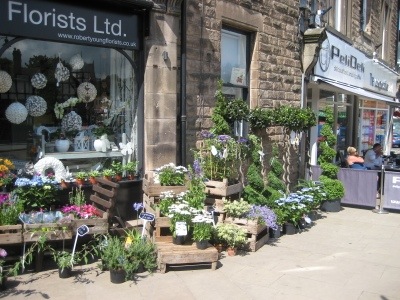 I am a Christian, a wife, a mother, an ex-librarian, a minister's wife, a women's Pastor, a quilter, a reader, I enjoy thinking about things slowly, I love cups of tea, I love sitting at my kitchen table in dappled sunlight and chatting with my friends, my children's friends, my family abut anything and everything.
View all posts by sarahcondie →
This entry was posted in Travelling and tagged Hopton, Hopton Hall, Katherine Gell, Peli Deli Cafe Matlock, Wirksworth. Bookmark the permalink.